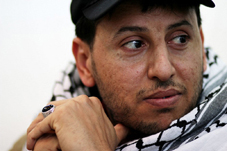 Prize will be presented on 1st December 2011 in Brussels by Mrs Viviane REDING, Vice president of European Union, commissioner for Justice, Fundamental Rights and Citizenship.

Fathi Terbil (Arabic : فتحي طربيل‎), 41 years-old, is a Libyan lawyer and human rights activist. He represents the relatives of over 1000 prisoners allegedly killed by Libyan security forces in Abu Salim Prison in 1996.

Fathi Terbil's arrest in February 2011 sparked a demonstration in Benghazi on 15 February by around 200 relatives of the deceased prisoners, which began the 2011 Libyan protests.

The protests reportedly began after the arrest of Fathi Terbil who represents relatives of more than 1,000 prisoners allegedly massacred by security forces in Tripoli's Abu Salim jail in 1996. He was later said to have been freed.

Several years ago Terbil got the best case of his life when the Qadhafi regime brutally suppressed a mutiny at Abu Slim prison near Tripoli in 1996. Human rights organisations say 1,200 prisoners were massacred in two or three hours. One of Terbil`s brothers, cousins and a brother-in-law were among the deceased. The prisoners mutinied to demand better conditions, fair trials and visiting rights.

Since agreeing to represent a group of families in Benghazi, who lost loved ones in the crackdown, Terbil has been arrested seven times.

On 17 April 2010, he was demonstrating as the lead coordinator for the victim's families, of the Abu Salim prison massacre in marching in front of Benghazi Court demanding that the Libyan government disclose the facts and events surrounding the June 1996 massacre.

A government supported families' association for the prison guards and police involved in the massacre rallied a counter-protest and attacked the victims' families.  The Secretary of the   association led the throng armed with a large machete. He  slashed the head of Fathi Tarbil, who would later be taken to hospital for emergency treatment.

On Feb 15, about 20 heavily armed security personnel came to arrest him at home. He was taken to Abdallah Senussi, who is in charge of Qadhafi`s security personnel and who was in Benghazi. The news spread quickly among the victims` families who decided to demonstrate for his release, with a protest up to 2000 people in front of Police Headquarters in Benghazi.

Fathi Terbil was finally released at dawn on February 16.

On Feb 17, the uprising began in Benghazi and the city fell quickly to Qadhafi`s opponents. This was accompanied by simultaneous protests in Al Bayda and Az Zintan, where police and security buildings were set on fire. Protests continued throughout the following day, growing in size. A police station was also set into fire in Al-Quba.